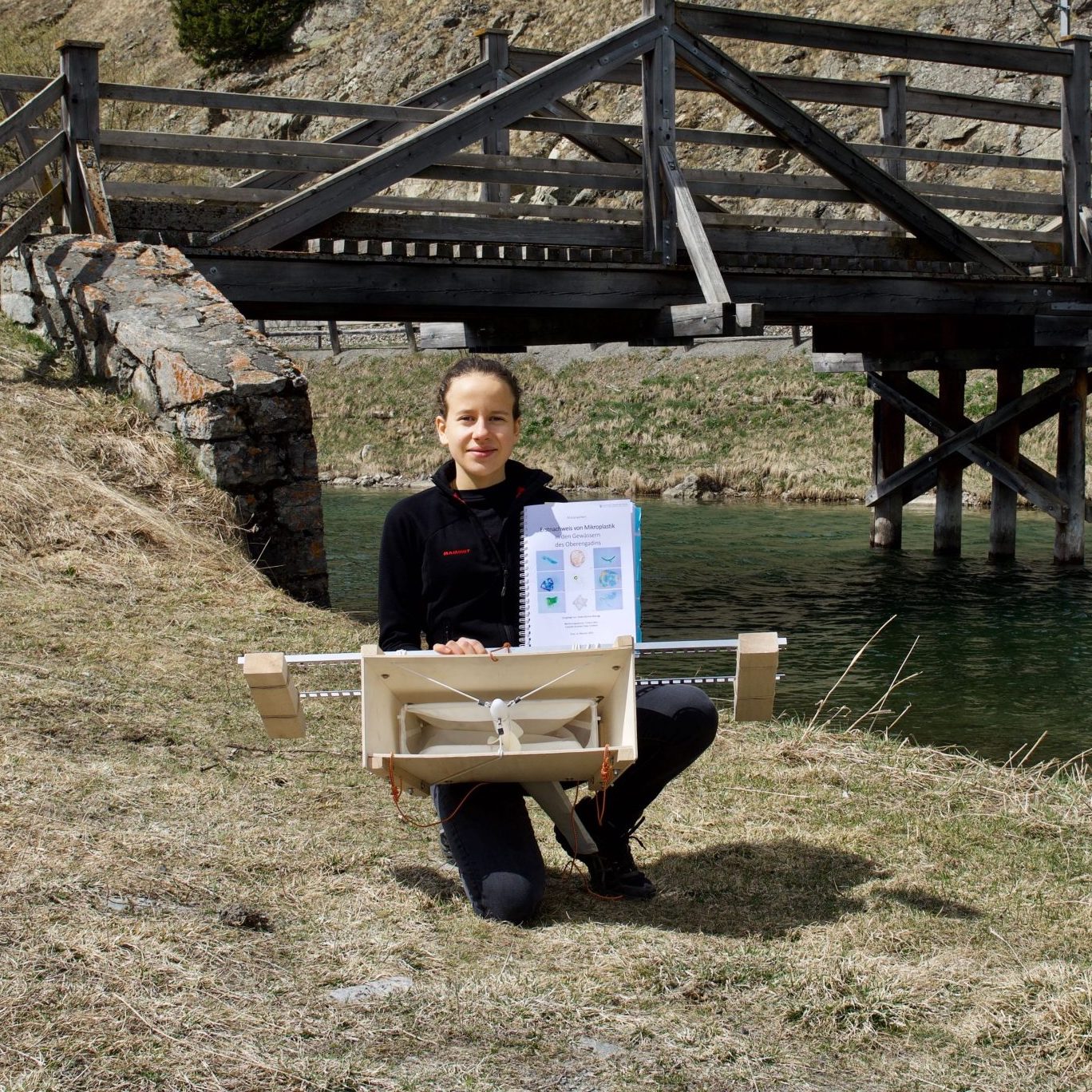 Bern (24th April 2020) – The national contest for young researchers, Swiss Youth in Science, celebrated its 54th edition with the participation of 136 finalists from 20 cantons. This year, the competition had to be conducted online, which meant a considerable challenge for the organisers as well as for the participants. The Swiss Junior Water Prize 2020 was granted to Anna Sidonia Marugg, a talented young student from the Lyceum Alpinum Zuoz (GR), for her work “Erstnachweis von Mikroplastik in den Gewässern des Oberengadins” a research on the presence of microplastics in alpine water systems, some of them considerably close to the water springs.

The awarded entry is a highly interdisciplinary project in collaboration with the University of Basel. Anna Sidonia used a LADI-trawl of her own manufacture to collect samples in different water bodies in Oberengadin, where data of microplastics are not available yet. She established 8 different collection sites and was able to collect microplastics from all of them. In the laboratory, she could divide her findings in 22 types of microplastics, which she then analysed using further parameters like size of the collected pieces, frequency of occurrence, distance of the sample site to the water spring, population density or land use for sports and leisure areas in the vicinity of the sample site. Her findings surprise in the variety of microplastics that can be found in places commonly regarded as idyllic untouched nature. Anna Sidonia´s self-constructed LADI-trawl proved to be light and portable enough to be used by one person in remote areas where the use of motorboats is not possible. This device has potential to be broadly used by schools.

The jury of Swiss Youth in Science acknowledged Anna Sidonia´s work the distinction “excellent” and commented with the following words “The work presented here by Anna Sidonia Marugg was a highly interdisciplinary project in collaboration with the University of Basel and the Lyceum Alpinum Zuoz and required a high degree of commitment, independence and a structured approach which was implemented with bravery. Data on microplastics in the alpine region are not yet available. This work makes an important contribution to generate scientifically sound knowledge concerning the quantity and occurrence of microplastics in the Alpine region.” (Original Text in German, translation from Karla Schlie)

The summary of Anna Sidonia Marugg´s work can be found here (SJf, German)

The Swiss Junior Water Prize recognises young students between 15 and 20 years old, who have conducted outstanding school projects related to water and sanitation with proven environmental, scientific, social or technological significance. The winner is entitled to represent Switzerland in the international competition Stockholm Junior Water Prize. The Swiss Junior Water Prize is a joint effort of the Swiss Water Partnership and the Swiss Toilet Organisation, aiming to encourage Swiss Youth to grow an interest in water and sustainability issues.

The Swiss Junior Water Prize can be carried out thanks to the sponsorship of the following organisations.

A special recognition to VSA for their contribution to enhancing the visibility of the Swiss Junior Water Prize within the water sector.