The Swiss Energy and Climate Summit (SwissECS) is Switzerland’s leading conference for energy and climate issues. Every year, over 800 decision-makers from industry, the energy, finance, insurance and construction sectors and representatives of NGOs, the Swiss government and cantons take part in the event.
The SwissECS has been held annually since 2007 and always takes place in Bern in September.

The SwissECS showcases cutting-edge technologies from energy and environmental technology that play a key role in climate protection. Participants can find out more about current energy and climate issues in various formats, such as keynote speeches, interactive podiums, innovation pitches, breakout sessions and an exhibition zone featuring demonstrations of the latest solutions.

Update on SDG Monitoring and HLPF 2018

SDG Monitoring and Swiss Implementation of the 2030 Agenda

Switzerland was strongly committed to the development of the 2030 Agenda and helped to determine its content. It was actively involved in drafting the SDGs and developing the mechanism to follow up and review progress. To this end it engaged in a broad dialogue with representatives from business, academia, civil society, politics, administration and the public.

More specifically, the Federal Council is working both do­mestically and internationally to achieve the goals of the 2030 Agenda. It seeks to do so in partnership with the cantons, communes, business, civil society and academia. In prac­tice, this means taking steps to reduce CO2 emissions, promote gender equality and close material cycles, for example. However, it is also about creating conditions in which public and private investment can effectively foster sustainable development.

In addition to its efforts at home, Swit­zerland is also working to implement the 2030 Agenda through its foreign policy and development cooperation, for example by providing financial and human resources to support poorer countries.

Since the Federal Council has decided to oversee implementation of the 2030 Agenda, the pro­cess is being led by the Federal Office for Spa­tial Development (ARE) and the Swiss Agency for Development and Cooperation (SDC). The first steps were taken in spring 2018 and are being coordinated by an interdepartmen­tal working group: An in-depth review ascertained the latest status of 2030 Agenda implementation, both nationally and internationally. The survey also clarified where most action is needed to achieve the SDGs. It also identified oppor­tunities for Switzerland arising from the 2030 Agenda.

The results of this work formed the basis of Switzerland’s first country report to the UN issued this summer 2018.

As part of an international review mechanism, states must report to the UN on their progress in implementing the SDGs. These country reports also allow governments to keep their citizens and parliaments up to date. Switzerland has adopted a four-year reporting cycle, with its first country report issued this summer 2018. This country report forms the basis for the Sustainable Development Strategy.

Switzerland has already made excellent progress. It leads global rankings in important areas such as protection against natural hazards, social cohesion, quality of life and a sustainable economy. Yet some significant challenges remain. For example, Switzerland’s resource consumption – when extrapolated to the world’s population – significantly exceeds the planet’s carrying capacity, and polluting processes have increasingly shifted to countries in the supply chain. One of the challenges facing Switzerland is thus to reduce the negative impact of domestic consumption on people and the environment in other countries.

SDG 6: Ensure availability and sustainable management of water and sanitation for all

Switzerland has extensive water resources. The entire population has access to drinking water. There are also efficient wastewater treatment plants that are operated according to the polluter pays principle. Under its constitutional mandate, the federal government promotes integrated watershed management. The cantons determine the appropriate minimum residual flows for each watercourse and withdrawal site. Switzerland has reduced its water withdrawal over the last ten years.

Switzerland’s water sector faces certain challenges, however. Climate change has resulted in local water shortages in recent years. Recent scientific studies indicate that this phenomenon will intensify in the summer months in the future. At the same time, the glacier melt will continue to increase.

Regular inspections are carried out to check drinking water contamination limits. Switzerland implements the WHO Protocol on Water and Health. Thanks to the construction of wastewater treatment plants, nitrogen and phosphorous levels in large and medium-sized watercourses have been significantly reduced. Measures have been taken to combat micropollutants, an action plan on risk reduction and the sustainable use of pesticides has been adopted and legislation on SVHCs (substances of very high concern) has been introduced. In addition, the Waters Protection Act provides for over 4,000 kilometres of watercourses to be restored in the next 80 years. Meanwhile, more than 1,000 barriers to fish migration, 100 hydropower plants that cause artificial run-off fluctuations, as well as 500 hydropower plants and other facilities that lead to bedload deficit in watercourses, are to be rehabilitated by 2030.

As a country bordering numerous transboundary watercourses, Switzerland is involved in a number of joint water commissions in Europe. At global level, it supports the human right to clean drinking water and sanitation, initiatives to implement sustainable water resource management, integrated monitoring of surface water and groundwater, and increased multilateral coordination in the water sector.

The priorities of Switzerland’s international cooperation are: i) ensuring access to drinking water and sanitation for all; ii) improving water quality and preventing pollution; iii) promoting integrated water management and transboundary water cooperation; and iv) efficient and sustainable water use and protection and restoration of water ecosystems.

Update from the HLPF

The overall result is positive. In many areas such as health, education, energy, occupation, innovation and infrastructure Switzerland is on track. However, Switzerland has also areas with a call for action such as the domestic consumption behavior, the way Switzerland’s dealing with the non-sustainable resource-consumption or the production conditions for imported goods. Further, based on specific actions that Switzerland already took, Leuthard called for more engagement to reduce global warming and reduce the negative effects of the economy on nature.

Regarding the SDG 6 (global water shortage) and the role of companies in the implementation of the SDG’s, the Federal Councilor further called for the adaptation of market conditions worldwide that encourage private investments to achieve sustainable development.

Exchange on Water Innovation and Technology

The goal of this meeting is to create another opportunity to exchange KNOWLEDGE.

It is your chance as SWP member to present your organization and expertise to the Danish Water Technology Group consisting of different companies active in the field of water, innovation and technology (a detailed list will follow in September). At the same time, you will get the chance to learn more about these Danish Water companies and their current research trends. The goal is to create an opportunity to expand your network, connect for potential new market opportunities and collaborations.

Expect a delegation of 10-12 Danish participants (Board members, leaders and member organizations of the Danish Water Technology Group).

Deadline: Express your interest until 15th October 2019 per email to the SWP Secretariat.

For any further questions, please contact the SWP Secretariat.

Meet the SWP and its Members at the Stockholm World Water Week 2018! 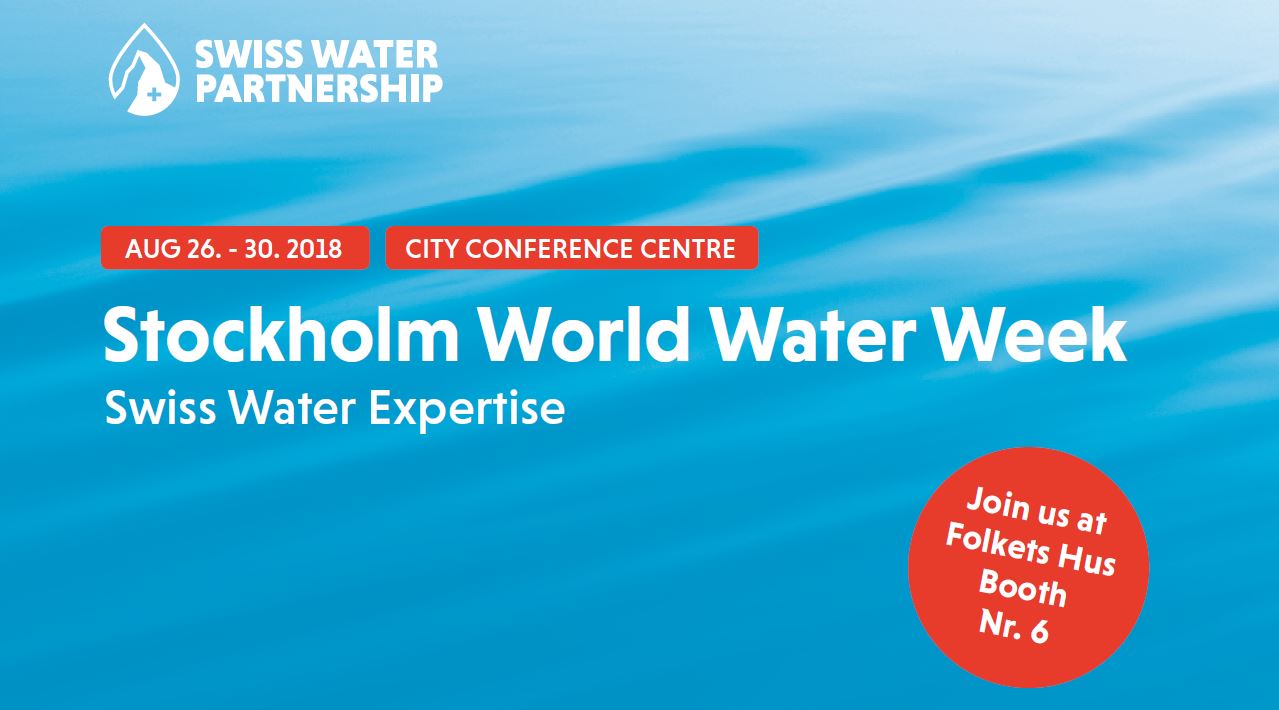 The official program is out – have a look!

Following members are involved in the SWWW 2018

Have a look at their profiles: 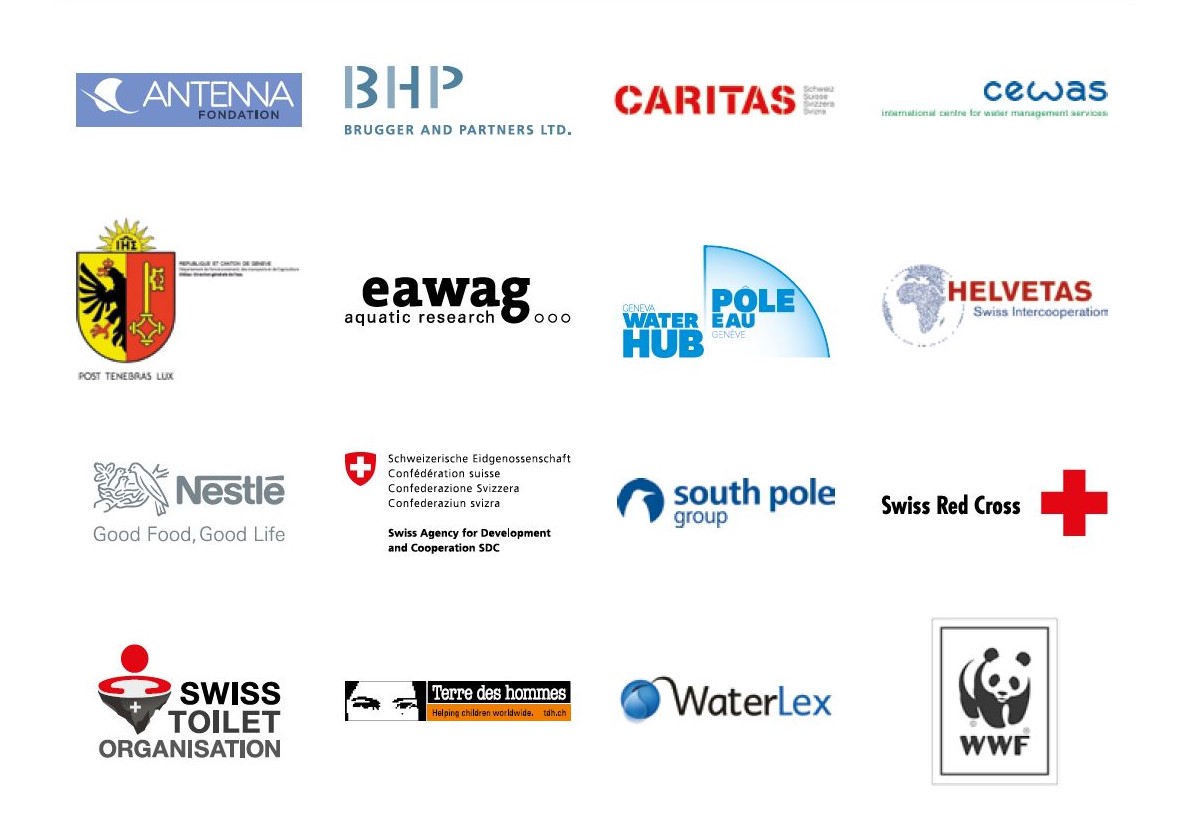 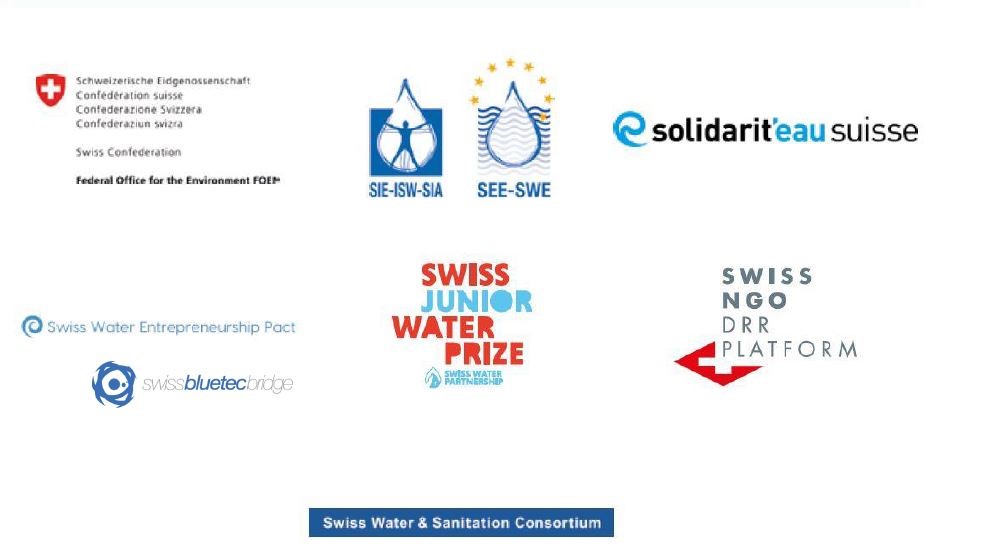 Extended Deadline: Exchange on Urban Resilience Organized by SECO and the World Bank

On 6th September 2018, the Swiss State Secretariat for Economic Affairs (SECO) and The World Bank are organizing an exchange with Swiss Business Community/ Stakeholders that work in the field of Urban Resilience, Disaster Risk Reduction (DRR) and Disaster Risk Financing. The idea is to present the engagement of SECO on urban resilience, link Swiss Businesses with the World Bank and discuss possibilities of potential future collaboration, as well as to showcase Swiss Expertise on this issue to the World Bank.

Topics that will be covered include: Emergency preparedness & Response; Resilient Infrastructure; Geospatial Solutions and Private Capital Mobilization. The event takes place in the margins of the Steering Committee of the City Resilience Program (CRP)  which will come to Bern for its annual Donor Meeting.

Deadline for Registration: PLEASE REGISTER VIA E-MAIL TO info.wein.cooperation@seco.admin.ch LATEST UNTIL 26. AUGUST 2018.

If you have any questions or if you would like to receive further information please click HERE.