The SWP has launched the working group on nature based solutions for water in October and held its first meeting in November 2017.

The idea was to exchange on each organization’s topic of expertise in Nature based Solutions (NbS) for water and to identify joint activities for 2018. The SWP tries to develop a thematic cycle based on the UN Water theme each year. The rationale is to showcase/produce Swiss knowledge for WWW in Stockholm.

Event at the World Water Week 2018

The SWP has identified the world water week organized every year in Stockholm by SIWI as a strategic event for the network. SWP participates since its creation: it is a unique way to promote SWP members and Swiss solutions to a broad audience of policy makers, practitioners, researchers and other peers. SWP hosts a stand with SWP members and usually submit various sessions` proposals (90minutes session). SIWI reviews the proposals from all organizations and – if approved – allocates the day and hour.

In the recent years, SWP has developed concepts that use interactive moderation such as market place to showcase Swiss solutions but also to gather of feedbacks and peer reviews. This interactive moderation is highly valued by SIWI. The cost of the event is shared between the co-conveners (with a discount if SWP manages to get sponsoring).

Interested SWP member that plan to co-convene a session in Stockholm can share with the SWP secretariat its expertise/experiences and questions on the theme of NbS for Water or the focus they want to explore (for instance funding, institutional bottleneck etc.).

An organization can also make directly a proposal with other members and special guests (such as IUCN for instance).

Deadline for topic submission to the SWP secretariat is 22nd December 2017.

By January 12, the secretariat will have reviewed the inputs and proposals, contacting members if needed or for thematic leadership and will suggest possible session(s).

From January 15 to 19, the secretariat organizes the exchanges to finalize the proposal(s) and ensures regular communication with SIWI. The deadline for the submission of proposals for the Stockholm World Water Week is January 21st 2018.

As not all SWP members of the Working Group can make it to Sweden every year, the idea is that the SWP could organize a meeting in Geneva to present the Swiss expertise to the international Geneva (UN agencies). The half-day or one-day event (plenary/group discussions and field visit) could be organized either previous to Stockholm to feed into the sessions the SWP organizes in Stockholm or after it to present outputs. In 2018, the idea would probably be best be to organize an event in fall 2018 as World Water Day collapses with the World Water Forum in Brasilia.

Interested SWP members that want to contribute to the Geneva event can communicate their participation to the SWP secretariat by end of January. Same as for Stockholm, each organization offers contents and possibly thematic leadership. The SWP will follow-up in February/March 2018.

The following SWP members are part of the group:

The Swiss Water Partnership (SWP) together with the Swiss Agency for Development and Cooperation (SDC) will be present with a Swiss Booth at the World Water Forum 2018.

Currently, the different submitted proposals for the forum’s processes (thematic, political, regional, civil..) are being reviewed. The results whether your organization’s proposal has been accepted will be announced in January 2018.

An official tender had been launched in October 2017 to select a partner for the booth design and construction. In the meantime, our partner has been confirmed and the booth will be produced in collaboration with the Swiss-Brazilian Chamber of Commerce.

The call for participation in the Swiss booth is now closed. Many interested proposals from SWP members and SDC partners were handed in. A first version of the booth program has been drafted. The final program and further information on the exact booth slot for participating stakeholders will be communicated in January 2018.

In order to produce the program, we would like to invite all confirmed booth participants to send the following information to the SWP Secretariat until 19th January 2018:

Information about your event at the booth

Besides the official Swiss booth program, a specially dedicated website will be created as a main tool for communication indicating information about the participating members, the Swiss activities in Brasilia and the Swiss booth program online. This will increase the visibility of your organization and can be shared easily in your network and on social media.

In order to produce these main communication material, please send the following information to the SWP Secretariat by 19th January 2018:

To get an idea how this content will be presented, please visit the following LINK.

In case of any further questions, please do not hesitate to contact the SWP Secretariat.

Controla Tu Gobierno from Mexico is winner of the SWISS WATER INTEGRITY AWARD 2017!

The Swiss Water Partnership has the pleasure to announce that the Mexican organisation Controla Tu Gobierno has been awarded with the SWISS WATER INTEGRITY AWARD 2017.

The organisation has developed a social accountability model that focuses on building capacities in the communities they work with, based on the analysis of public sector information and to develop a process that goes beyond ex-post accountability, and strives to involve citizens in the performance of policies currently in force.

The jury awarded 3’000 Swiss Francs to the small organisation because of its perseverance in mobilizing the community and key stakeholders to promote water integrity. They have:

Wish to find out more about Controla Tu Gobierno or stay tuned for their success story? Check out their WEBSITE. 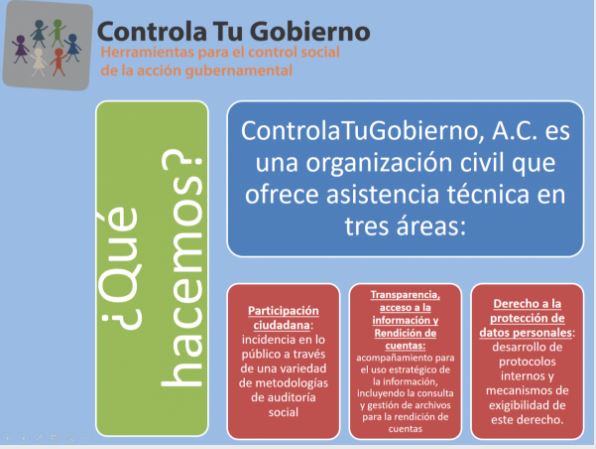 Flyer: Invitation to the Swiss Reception at the Swiss Water Partnership Booth 2017

Publication: Water as an Asset for Peace- Atlas of Risks and Opportunities (2017)